What does an interventional cardiologist have to do with olive oil?

The usual day of an interventional cardiologist in the cath lab is most likely to include cases of coronary artery disease, either in its acute form (“acute coronary syndromes” that is, heart attacks or unstable angina) or in its chronic form (chronic stable angina). The interventional cardiologist uses percutaneous procedures, like balloon angioplasties and stents, along with a host of medications to open clogged coronary  arteries. In no heart procedures is olive oil used!

Then what is the olive oil connection? The story of diseased heart arteries starts a few decades before the interventional cardiologist is called upon to perform any procedures. What starts the artery disease is usually either smoking or an abnormal metabolism. It is the abnormal metabolism that leads to heart disease than can be significantly affected by olive oil.

Olive oil can reduce the risk of heart attacks and stroke.

In our thirties and forties many of us, exposed to the western lifestyle (limited physical activity, processed and fast food loaded with salt and saturated and trans fats, and high-glycemic index snacks such as cookies, desserts, candies) harbor shallow cholesterol plaques in our coronary arteries. The slow time line of “atherosclerosis” (cholesterol plaque buildup in the wall of the arteries) can be suddenly and unpredictably punctuated by a “crisis” caused by an instability of the plaque.  Either a “crack” or “fissure” forms on its surface or a small “bleed” takes place inside the plaque. The unstable plaque then prompts the flowing blood to form a clot at the plaque site because the blood interprets the unstable plaque situation as “bleeding” and it responds the way it is programmed to: by forming a clot. 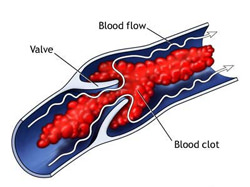 What is truly dramatic is the time line of clot formation (“thrombosis”): it takes between one and four minutes for a clot to form inside the artery and transform a previously stable plaque that was causing little or no narrowing of the artery lumen to now become 100% occlusive. This stops the flow of blood and the nourishment of the heart or brain cells that depend on that artery abruptly ceases. The cells, then, start dying fast, resulting in a heart attack, a stroke, or sudden death. Prime risk factors for both plaque development (atherosclerosis) and plaque instability with clot formation (atherothrombosis) are: 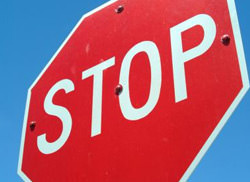 While we can do nothing to counteract our heredity or our age we can do a lot to stop the other two “killers”: smoking and metabolic syndrome. Whereas olive oil (and the other features of the so called “Mediterranean diet” or “Mediterranean lifestyle”) is strongly connected with the health of our metabolism it has no smoking cessation properties, to my knowledge.

The Metabolic Syndrome is a combination of abdominal obesity (also called “visceral obesity”, “central obesity”, “apple-shape” body, or “beer belly”) along with abnormal cholesterol, abnormal sugar metabolism (pre-diabetes or type 2 diabetes), and high blood pressure (“hypertension”). It is sedentary lifestyle and an unhealthy diet that lead to metabolic syndrome. A diet is unhealthy if it contains: 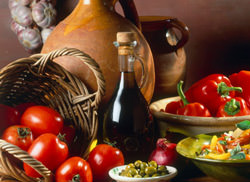 A healthy diet, on the other hand, along with regular and adequate exercise, helps prevent or, at least, attenuate, the metabolic syndrome and atherothrombosis (heart attacks and strokes). A healthy diet is not only about what not to contain (the four categories listed above) but also about what should be included every day:

•  At least five portions of fruits and vegetables

Three quarters of olive oil consists of MUFAs (mainly oleic acid) with the rest almost equally divided between PUFAs and saturated fats. MUFAs are very beneficial for our health because they:

•  “displace” saturated fats from the diet

•  delay the absorption of the rest of our food, preventing fast absorption of high-glycemic index carbohydrates and, thus, prevents insulin spikes and premature hunger

•  increase adiponectin, a hormone that promotes the “burning” of body fat for energy production

In particular, olive oil has:

•  the highest content of MUFAs, as compared to other vegetable oils or nuts

•  the higher oxidation threshold, so when used in deep-frying is less likely than any other vegetable oil to become partially hydrogenated (transformed to the “poisonous” trans-fats), and it

Olive oil contains almost no sodium (salt) and carries about 9 calories per gram.

Metabolic syndrome and atherothrombosis (heart attacks, strokes, or sudden death) are more likely to occur when our body balance is shifted towards inflammation (proinflammatory) and clot formation (prothrombotic). Olive oil helps counteract both morbid states by virtue of its MUFAs and antioxidant content. Furthermore, antioxidants and oleocanthal counteract the neurotoxic effect of the ADDL proteins involved in Alzheimer’s disease. Olive oil also appears to have an anti-aging effect and reduce the risk of certain cancers including breast, pancreatic, stomach, laryngeal, and urinary tract cancer. Beyond a favorite effect on LDL and HDL levels, olive oil has two more benefits that reduce heart attacks and stroke:

•  It prevents oxidization of LDL which renders it more atherogenic than its non-oxidized form. This beneficial effect of olive oil on lipids is mediated through its antioxidant components, especially polyphenols and vitamin E.

Inflammation and free radicals damage brain cells and impair synaptic function, contributing to the neurodegenaration and brain cell loss that characterizes Alzheimer’s disease. The squalene content of olive oils (along with its other antioxidants) has neuroprotective effects and does not allow oxidation of its monounsaturated fatty acids (which unfortunately occurs with polyunsaturated fats that may, thus, contribute to nerve damage). Oleocanthal, another olive oil component has been shown in scientific research to slow down the progression of Alzheimer’s.

Free radicals attack and damage cells and its constituents, especially DNA found not only in the cell nucleus but also in the mitochondria. It is hypothesized that olive oil with its antioxidant effects inhibit peroxidation and reduces mitochondrial DNA damage, preserving vitality and youthfulness. It appears that the oleocanthal component of olive oil significantly contributes to olive oil’s anti-aging effects. There is a report of a 120-year-old Israeli woman who used to drink a glass of olive oil every day!